Why do Jaylor TMR’s take less power to operate?

The short answer is, the patented Jaylor Auger.

Vertical TMR mixers primarily utilize gravity to mix ingredients by gathering them into the base of the auger, elevating them to the top of the mass in the tub, and then causing them to mix as they tumble outward and down between the auger and the walls of the tub, and subsequently return back to the base of the auger to be elevated again, until a uniform mix is achieved. When done efficiently, and significant particle size reduction (processing) is not required, a uniform mix can be readily achieved in as little as three minutes.

When the Auger and overall TMR mixer design function efficiently, as they do with a Jaylor mixer, the auger slides under the mass of feed in the mixer with a minimum of effort, and gathers an appropriate amount of feed into the auger. The feed then slides relatively effortlessly vertically within the auger and finally emerges at the top to be distributed atop the mix before tumbling downward again. When this process occurs with a minimum of wasted energy there will be three key indicators, which can readily be observed in Jaylor mixers. 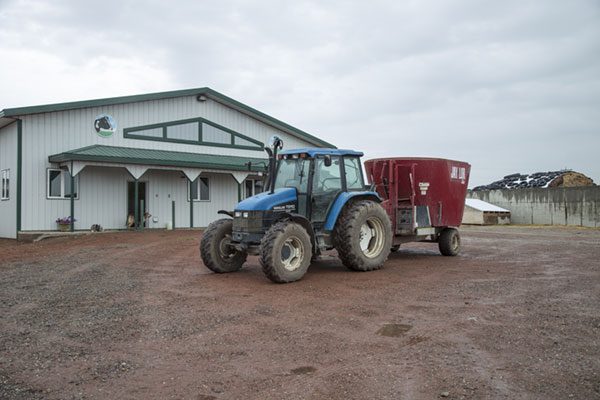 First, there will be little clockwise circulation of the feed in the mixer when relatively full. Ideally, the mixing action will more resemble what some refer to as “volcanic action”; with feed rising aggressively from the auger at the center of the mix and then moving laterally towards the walls of the tub in all directions, where it then “rolls”, or slips, below the surface. The second key indicator is minimum pressure on the walls of the tub. Inefficient augers cause feed to be forced outward against the outer walls by centripetal action, increasing the force required to turn the auger. Jaylor mixers are so efficient that a four square foot observation window made of one quarter inch standard plexiglass installed in the side wall of the tub will withstand normal mixer operation, and is used on selected demonstration models.

The third key indicator is that less efficient augers increase the friction and other forces between the feed and the auger and tub of the mixer. This is what simultaneously increases horsepower requirements and abrasive forces on the feed that result in excessive reduction in size of the smaller and more fragile particles in the feed. This, in turn, creates the appearance of a “mushed” feed with particle size distributions that are more susceptible to sorting.

In contrast, efficient mixing, as experienced with Jaylor mixers, results in rapid reduction of large particles to an optimum size, with minimal further reduction and abrasion of small to medium particles, to give a uniform distribution of cleanly cut, clearly identifiable feed particles that resist separation during eating, primarily because it uses a minimum of horsepower to get the job done … “Because Nutrition Matters®“.