But Perhaps Don’t Get Carried Away

Effects of wet ingredients and water addition on intake

There have been numerous scientific studies that have shown that intake of silage alone, as well as TMRs containing silage, declines as silage moisture content decreases, and that excessive addition of wet ingredients such as wet brewers grain can limit TMR intake in both beef and dairy. These studies appear to be the primary basis for recommending that TMR moisture content is optimized around 60% dry matter (DM), and should not go below 50% if additional moisture is required to decrease sorting behavior. 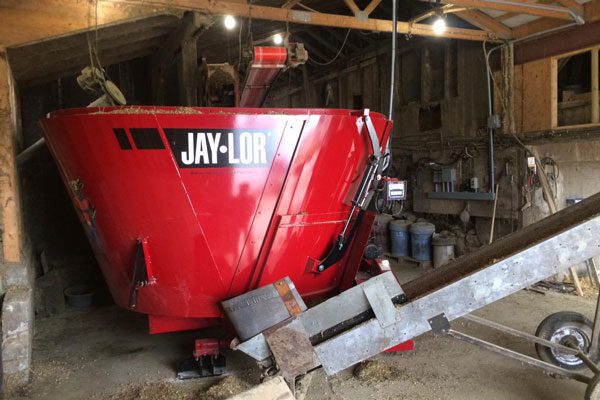 However, a search of scientific literature from the past 50 years shows that there have been few studies that have examined the effects of simply adding water to a forage or TMR on feed intake and performance in lactating cattle. Of these, as early as 1961, Thomas et al. with the USDA at Beltsville, Maryland showed that the addition of water to hay or wilted silage, down to a dry matter content of 22%, did not negatively affect consumption by dairy heifers, and in some cases increased consumption. The same study, as well as subsequent studies, shows that VFAs and others components arising from fermentation in silage, as well as the nutritional characteristics of wet feeds, are responsible for these effects on intake, as opposed to moisture itself.

Robinson et al. (1991), from the Agriculture Research Station in Fredrickson NB, found that “Dry matter intake and milk yield and composition were not influenced by the moisture content of the mixed ration …” when water was added to a TMR by presoaking the grain mix of the ration for 24 hours to give dry matter contents of 35%, 45% and 60%”. In an analysis on multiple studies involving the feeding of a range of forages as hays and wilted silages, as well as corn silage, Holter and Urban (1992) at the University of New Hampshire found “no significant relationship between DM content of the diet and the resulting ad libitum intake in either dry or lactating cows”.

The above results lead one to conclude that as long as good quality forages and TMRs are fed, the addition of potable water should not in itself negatively affect consumption. The case where TMRs are susceptible to sorting may be less clear.

Effect of water addition on sorting

It is generally accepted that the addition of water, either directly or as wet ingredients (e.g. silage, wet distillers grains), is essential for minimizing sorting of grain from forages in mixed rations. Though scientific evidence is sparse, anecdotal support is strong. DeVries’ group at the Kemptville ON campus of the University of Guelph have shown that the addition of water, as well as liquid feed containing molasses, redistributes fine particles and starch into the larger particle size fractions as classified by the Penn State Particle Separator. A definitive study by Leonardi et al. (2005) at the University of Wisconsin–Madison showed that dropping the DM content of a relatively dry TMR from 81% to 64% by adding water,” reduced sorting and tended to increase neutral detergent fiber intake and milk fat percentage”, while dry matter intake and milk production were unaffected.

In another classic study, Lahr et al. (1983) at the University of Minnesota fed lactating cattle for the first 200 days of lactation four TMR rations based on alfalfa hay and corn silage that were identical except for moisture content from added water (78, 64, 52 and 40 %DM). These authors reported that DM intake declined linearly as TMR DM content decreased, though the intakes of the 52 and 40% DM rations were identical. At the same time, milk fat content increased linearly with diet moisture content increased, while milk production did not differ with moisture content of the diet. Since initial and final body weight, and on body weight change, also did not differ between treatments, it leads to the inescapable conclusion that feed efficiency, and likely digestion, improved with moisture addition. Given the hay content of the diet, it is possible these results were in part due to a reduction in sorting similar to that observed by Leonardi et al., though the authors did not study nor comment on feeding behaviour.

Two recent studies by the DeVries group have suggested that adding water to higher moisture TMR may actually increase sorting against longer particles retained on the top sieve of the Penn State Particle Separator. In these studies small numbers cows in post–peak to mid–lactation were given rations comprised of alfalfa haylage and corn silage (i.e. moist forage only, no hay) with initial DM contents of 56–58%, that were reduced to 44–48% DM by addition of water. Contrary to expectation, the addition of water actually increased sorting against the long particles retained on the top sieve of the Penn State Particle Separator, while DM intake decreased by 11 and 17%. It is unlikely that the decrease in DM intake was a result of the increased sorting, however, since the sorting amounted to about a 9% reduction in consumption of the material retained on the top sieve, which was only about 9% and 3% of total diet DM. Furthermore, milk production and composition did not differ between treatments, suggesting an improvement in digestion and efficiency similar to Lahr et al., though body weights and weight changes were not reported.

Two subsequent studies (2012) by the Devries group have shown that adding water or liquid feed containing molasses to rations comparable to those above, when fed to late lactation and early lactation cows, respectively, either did not affect, or improved eating behaviour (decreased sorting), DM intake and milk production.

In summary, the weight of evidence demonstrates that adding water to mixed rations is beneficial, and likely essential, to keep ingredients from separating and being subject to cattle sorting grain from forages during eating, when they are dry (e.g. > 60% DM), and contain significant amounts of hay or other dry forage. Yet, a special case may exist, based on the work by DeVries, where the presence of sufficient moisture in the feed ingredient may cause added water to increase the ability of cattle to sorting against long forage particles of a size that are retained on the top sieve of the Penn State Particle Separator. Whether this is biologically or economically meaningful remains to be determined.

Like many consultants, this author has had good success improving situations involving sorting of TMRs with addition of water. Though producers are often reluctant to get started, they generally become enthusiastic when they see the results. The following are guidelines I have found to generally be successful.

(I have found adding water to the mixer on a per head basis, after the TMR is batched, more successful than having the producer add it by weight as a proportion of the mix. In this way, it is easier to track changes in consumption of actual TMR, as well as for the producer to manage the water addition him/herself … “Because Nutrition Matters®“.)