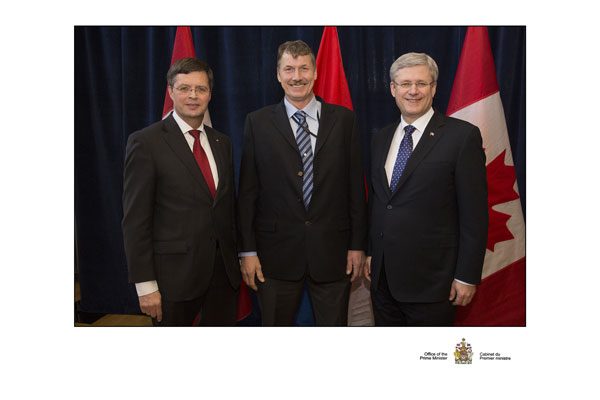 Jake Tamminga, president of Jaylor Fabricating Inc., has just returned from a Trade Mission in the Netherlands. He was honored to be a part of Prime Minister Steven Harper’s delegation of Canadian companies. Also attending were Mr. James Moore, Minister of Industry, Mr. Jayson Myers, President CME (Canadian Manufacturers & Exporters), Ms. Laura Jones Executive VP CFIF (Canadian Federation of Independent business). While in the Netherlands the Prime Minister hosted a question and answer sessions with Canadian and Dutch Business representatives. The Trade Mission was concluded on March 26th and it is hoped that Canadian companies will be able to position themselves early and benefit from the Canada-EU trade Agreement as a result of these first steps.

“I’m impressed with the drive of our government to open up new export market opportunities with aggressive trade agreements like CETA. As a small business owner, with 75% of the farm equipment we manufacture sold outside Canada, these trade agreements give me confidence that expanding our facility in Dufferin, Ontario is the right move. This is no ‘pie in the sky’ talk; Harper’s government is well underway with 9 agreements already in place and many more in the works. I am much honored to have been included in this trade mission to The Netherlands and expect we will see years of stability and strength of Canada’s economy as more trade agreements are effected.” – Jake Tamminga

“Canada and the Netherlands enjoy longstanding and expanding relations, based on strong people-to-people ties and a rich shared history. This year, our countries will celebrate the 75th anniversary of the establishment of Canada’s diplomatic presence in the Netherlands.” – Prime Minister Stephen Harper

Jaylor Fabricating Inc., is located in Dufferin County, Ontario and Manufacturers TMR mixers for the beef and dairy industry. With 25 patents currently on the mixer and an additional 7 pending, the Jaylor Mixer has earned a reputation as a leader in the business, Jaylor was built upon word of mouth and success on farms. Its reputation for high quality spread rapidly, ensuring Jaylor mixers were soon distributed throughout North American and 42 countries world-wide. Today Jaylor is a successful international corporation, but has never forgotten where it started and still maintains its roots firmly planted on the farm, with its production facilities located in rural Ontario.

“I feel very Blessed for the success we’ve had and thank God for the opportunity to serve Him, our customers and our great Country.” says Tamminga. As a young boy Jake immigrated to Canada from the Netherlands with his parents and siblings, later becoming a Canadian Citizen. Jake founded Jaylor Fabricating Inc. in 1993 and celebrated 20 years of innovation in 2013.