Corn Silage Quality: Are We Expecting Too Much?

When we consider the nutritional value of corn silage, we focus primarily on its energy, or grain content. And with today’s high grain prices, this has become even more important. However, on many dairy farms where corn silage also provides the majority of the forage in the ration, it is also important to focus on the quality of the fiber, or forage component in corn silage. Because, as it turns out, it’s not as good as many want to believe.

It’s most appropriate to view corn silage as a mixture of high moisture corn and a fair to relatively poor quality grass haylage. Corn silage in the mid–west and north–eastern United States, as well as southern Ontario, can exceed 50% grain on a dry matter basis (see table), and this proportion will increase when plant growth is restricted, such as in the case of drought.

Although large differences exist between varieties, it appears that as grain yield has increased, the fiber (NDF) content of the forage component has also increased, and forage quality and digestibility have subsequently decreased. An optimistic estimate of the energy content of the forage component of the corn silage above would be a TDN of about 56%. This would be comparable to alfalfa with a Relative Feed Value of only about 120, considerably below the standard that most dairy producers would consider acceptable for high producing dairy cattle. 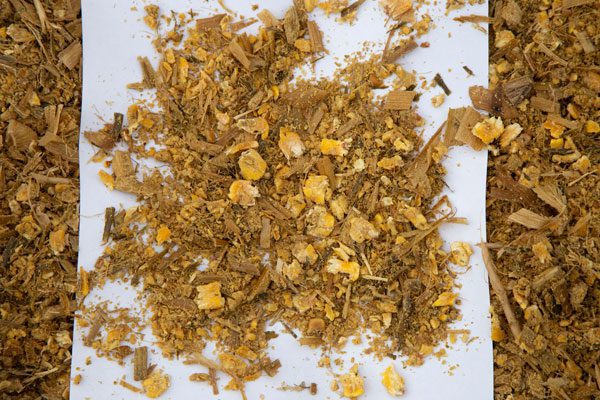 To complicate matters further, recommendations are routinely made to delay harvest until close to physiological maturity (near or at black layer) to achieve the highest grain content possible. This is occurring despite consistent research showing that both dry matter and fiber digestibility, and thus energy content, decline beyond one-third milk line, and that the resulting higher dry matter content (> 38% DM) impairs fermentation in the silo as well as decreases palatability and ruminal digestibility of starch. Furthermore, there are still cases where producers or contractors have adopted the recommendation to increase theoretical length of cut to three quarters to one inch to increase physically effective fiber, but are either not using kernel processors or setting the rollers close enough to be effective.

Considering that forage digestion provides the major precursor, acetate, required for milk fat synthesis, it is not surprising that herds fed large quantities of corn silage may suffer from low milk fat. This may also explain why relatively small additions of other high quality forage, such as alfalfa hay, or other sources of highly digestible NDF, can have such a positive effect on milk fat content. Where corn silage comprises a large proportion of the dairy ration and will supply the majority of the forage in the ration, consider using one of the newer leafy, brown midrib or other forage varieties, and be sure to harvest between half to two thirds milk line, and 32 to 36% dry matter for best results, … “Because Nutrition Matters®“.